Predating the United States Congress’ enactment in the mid-1930’s of the Rural Electrification Act, the State of Arizona encouraged development of it’s rural communities by authorizing the creation of special districts for the purpose of bringing power and water to rural areas. 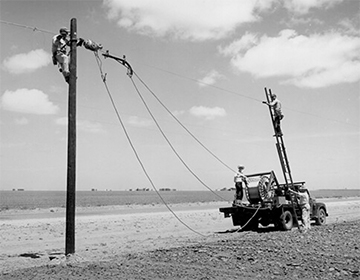 History of Electrical District No. 2

The first such entities were electrical districts. Electrical districts were created as Arizona political subdivisions by statute in 1922 by an attorney, Mr. A. Van Wagenen, Jr, who lived in Casa Grande, Arizona. He was requested by rural residents located in the vicinity of Florence, Coolidge and Casa Grande, Arizona, to create a type of public authority that would be authorized to provide them and others in the area with electricity.

The first attempt to form a district known as Electrical District No. 1 in 1919 was judicially challenged and the initial statutory authorization was declared unconstitutional, although the Arizona Supreme Court recognized the validity of the concept. In 1922, the Arizona Legislature enacted revised Electrical District legislation. Under article 13, 7 of the Arizona Constitution, the Districts are deemed “political subdivisions of the State, invested with the all the rights privileges and benefits, and entitled to the immunities and exemptions granted municipalities”. The Districts were authorized to serve all classes of customers.This time, when judicially challenged, the Arizona Supreme Court upheld the constitutionality of the authorizing legislation. To avoid any comparison with the first district and any confusion in 1923 over the financing of such a new entity, the first actual district organized and validated under the statute was named Electrical District No. 2, Pinal County, Arizona.

ED2 has chosen to be and remains today a full-service electric utility. The District serves all classes of customers (residential, commercial, industrial and agricultural).ED2 provides its customers with electric service at competitive rates and remains constant to its statutory and primary mandate to preserve the economic viability of irrigated agricultural lands within Pinal County.